Forbes has continued to inspect and add hotels to their last at a rapid speed.  They have added 107 new Five-Star hotels this year! There are now 268 Five Star Hotels, up from just 76 a few years ago!  From the press release:

The inspectors of Forbes Travel Guide journeyed from Santa Barbara to the Seychelles to find its 2020 Star Award winners, an elite group of the world’s most luxurious hotels, restaurants and spas.

To uncover the most outstanding properties, Forbes Travel Guide’s incognito inspectors check into a hotel for a minimum of two nights, posing as ordinary guests and paying their own way. Then they test up to 900 objective, exacting standards—including whether a staff member greets them curbside within 30 seconds of arrival, whether clothing left around a room is folded neatly or draped and placed within immediate view after turndown service, and whether the staff uniforms demonstrated exceptional design. The ratings tabulate 75 percent of a hotel’s score based on its service, while the remaining 25 percent is determined by the quality of its facilities.

Here is the full list of all of the Five-Star Hotels:

Last month AAA published their list of the newest Five Diamond hotels.  Now, it is Forbes’ turn.  Forbes has continued to inspect and add hotels to their last at a rapid speed.  There are now 115 Five Star Hotels, up from just 76 two years ago!  From the press release:

Forbes Travel Guide revealed its 57th list of Star Rating winners, which include our first star-rated properties in Mexico, the Caribbean, Latin America, Japan and Thailand. For the past year, our team of professional incognito inspectors has traveled the world in search of the best hotels, restaurants and spas to add to your must-visit list.

There are 18 Hotels that made the Forbes list for the first time.  From the press release: 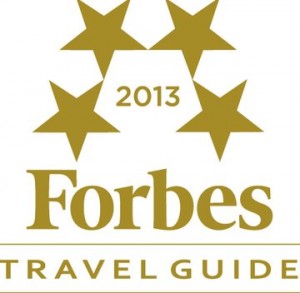 We’ve heard for quite a while that Forbes Travel (formerly Mobil) has really ramped up their inspections of hotels, restaurants, and spas in an attempt to compete with AAA.  They have just announced that they will now update their list twice a year, instead of just once each year.  From their press release:

The LA Times wrote a good article about what it takes to reach a 5 Star rating with Forbes Travel.  According to the LA Times:

It may not come as a surprise that California — a sun-splashed magnet for celebrities and big-spending tourists — leads the nation with the number of hotels winning five-star ratings from Forbes Travel Guide.  But winning the coveted rating is no easy feat. Only 58 hotels in the U.S. — 12 in California — were awarded the recognition this year, including, for the first time, the Resort at Pelican Hill in Newport Beach.

The Forbes five-star rating is considered more difficult to land than the five-diamond rating from AAA, which awarded its top ranking to 101 hotels in the U.S. this year.

Hotel owners vie for the Forbes distinction because it enables them to charge much higher rates. For example, the four-star Beverly Hilton recently posted average daily rates of $245 to $325, while the five-star rated Beverly Hills Hotel posted rates of $510 to $540.

The main difference between a 4-star hotel and a 5-star hotel is typically guest service and amenities.  From the article: